Ave!
I have painted all my infantry now!! I now need to base them.
I figured this seems to be a pretty good ash waste look.
Because-
A- it matches my tanks pretty well
B- it looks cool
C- Ash waste isn't desert. Don't know why GW has the official Steel Legion colour scheme desert, which does not match the tanks.

That picture above is an actual (mining) ash waste. I figure though, as ash is incredibly fertile, in some parts where the ash isn't constantly falling in Armageddon (not sure how all the ash got there really) plants will be in abundance.
For this, I will mostly use static grass. I plan to make a table to match my army too, at some point. This might be a good static grass to use:

So what I ended up doing was painting a dark brown (scorched brown mixed with black) and watering it down heavily to save SIX DOLLAR game workshop paint. :S  When I started, paints were three Australian Dollars!
Anyway, after dark brown I highlighted with the field grey colour of my infantry. This is a mix of Dark Angels green and Codex Grey. 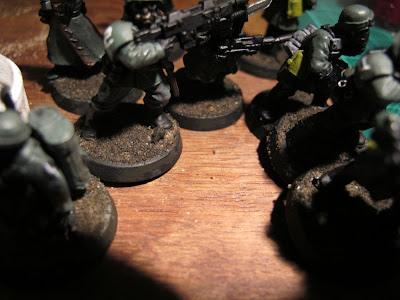 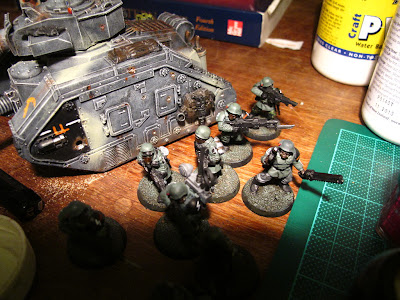 Equals this!! All I need now is the dead static grass and a few bitz here and there for the bases.
Now it all makes sense, the troops (who I just finished painting WOOT) now match the tank which matches ash wastes. The troops also match everything because I think field grey is the best all round camo for commonly encountered battlefields. The tanks less so due to the rotting flesh stripes. But they still look heaps industrial therefore awesome.