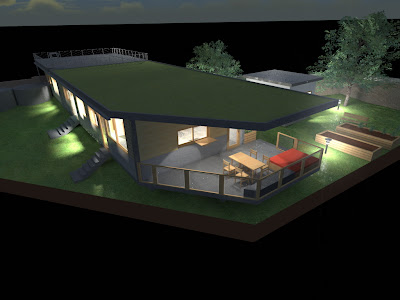 In 2-4 weeks I'll have finished a squad of paratroopers (I predict).
Meanwhile, here is a render I did for class.

This battle report highlights why you never need to upgrade your valkryie to have a lascannon.

I used the army list my 1000 point VDV Russian airborne force will be.

I got to trial out the new Idea for the valkryie veteran squad too.

Time is short but i'll give you chaps and lass(s)? a quick battle report. Forgot my canon, pics from Iphone.

SO to sum it up: (My opponent had a handicap due to not having a proper army and not having played for a while so I lent him additional points worth of troops not used by me) 6 kill points to 6.

If I can remember correctly I killed Marbo, a command squad, a leman russ, a basilisk, a missile launcher team and a sentinel
My opponent killed a guard squad or two , 2 chimeras, a vendetta, and something else.

It was an awesome game, and I was getting thrashed first half of the game, and then my valkryie and spec ops squad killed 3 kill points for me, saving my force from defeat.
I blame the poor start on...sheer enemy fire-power? And my reserves didn't come till turn 3 and 4. Which I guess is normal, but the enemy had most of his force on the table.
I guess my army doesn't have many targets and men to withstand a beating. 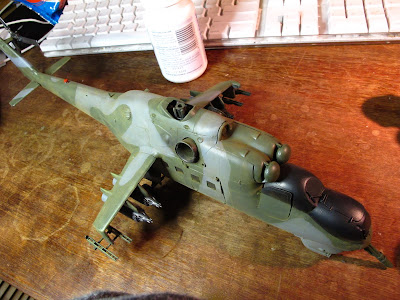 What else should I do to it? I'm going to add yellow warning bits on the rear rotor, some insignia and more weathering. I need to also paint the windscreens and steel around the cotpit. What colours should I paint the glass? Thoughts? It won't be as weathered as my BMD-1. 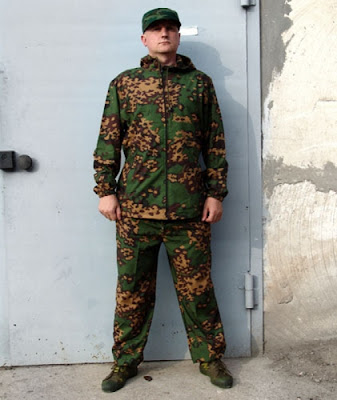 Same style as my veterans in my Steel Legion army. Partizan is a copy of flektarn and flektarn is a copy of some of the SS camo in WWII if I am correct. I really like these patterns. Effective and complex (I have tried out flektarn in the bush in australia and it's even good there, but would be amazing if the colours were better suited) 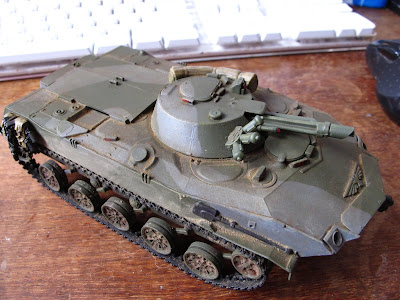 Here are the before additional shots again : 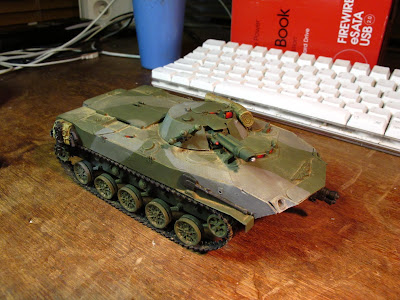 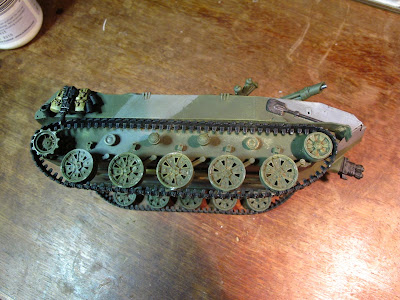 Granted, the light is different, but I added another colour of powder and added more.
Please comment if you have an opinion.
Also, how do you use white spirit to weather? I saw a bit on a forgeworld PDF but if anyone has some nice tips It would be appreciated.
Cheers!
Posted by revenant at 10:43 am 1 comment: 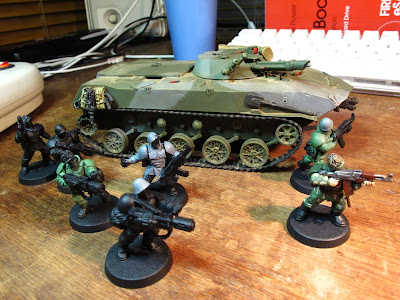 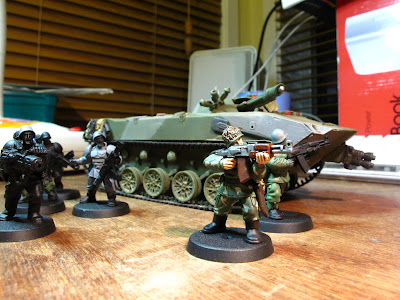 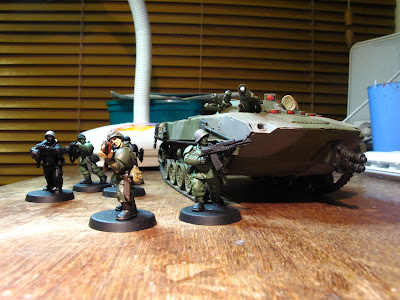 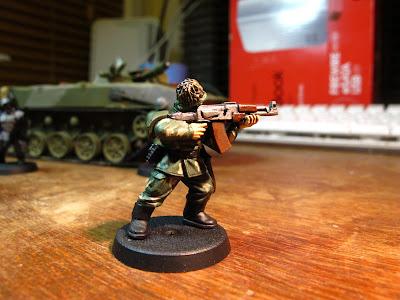 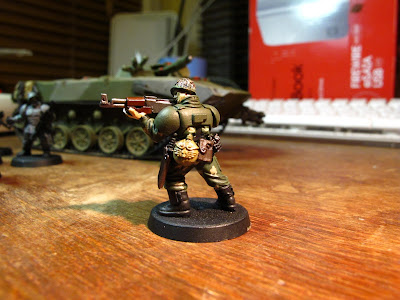 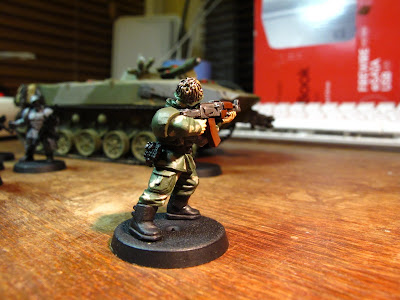 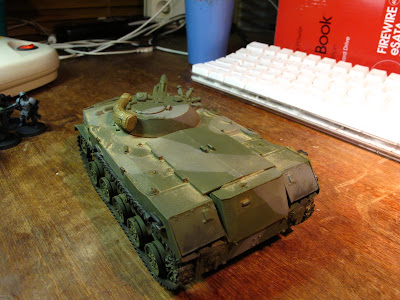 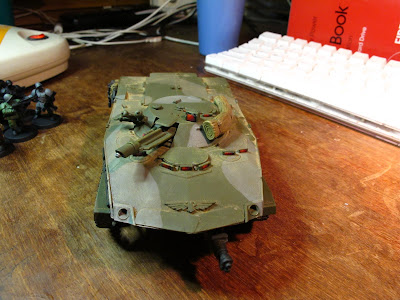 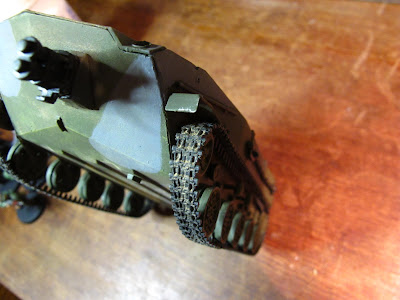 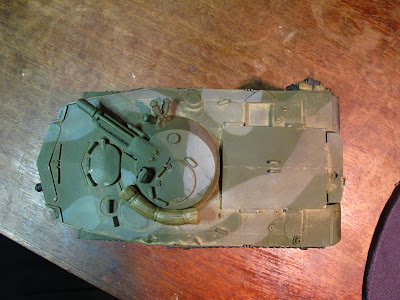 As you can see, I have used some weathering powders.
After all my problems with painting cleanly before, it turns out the paints I were using were too liquidy or didn't have enough pigmens. I used an old codex grey (5 years old maybe?) over a tamiya olive drab spray. I basecoated in chaos black, which then allowed me to drybrush gretchin green to highlight the raised areas. I used fortress grey over the codex grey.

I'm happy with the camoflauge scheme on the BMD. Suitable for urban or natural environments. I was considering using a desert yellow colour aswell, but desert yellow as we know is shit :/ I also didn't want to overwork the pattern.

As for the para I painted, I based it on this:

I need another flesh paint tone.
I painted the scheme (Knarloc Green and bleached bown blobs)
then used a badab black wash over it. Do you think it's effective?

I can't wait to paint my Hind Valkryie now that I know how! 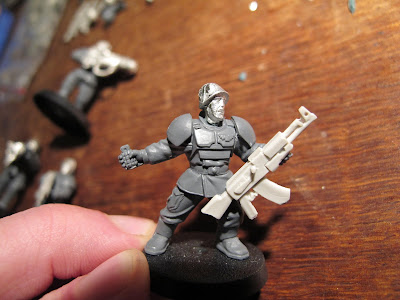 I'll let the pics speak for themselves. I think you now get the gist of my goal. Ps never greenstuffed before. I cut the hands fingers griping the Lasguns of and stuck it on a greenstuff wrist and thumb I made. 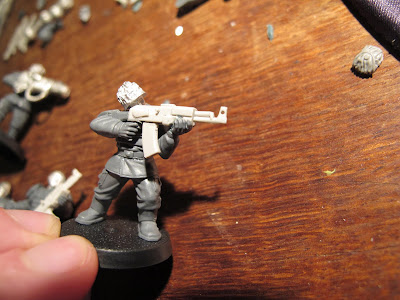 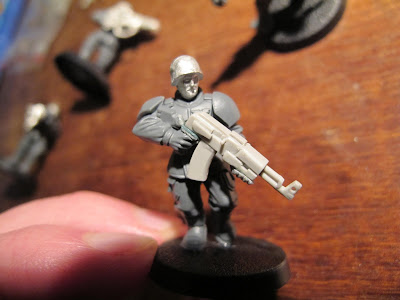 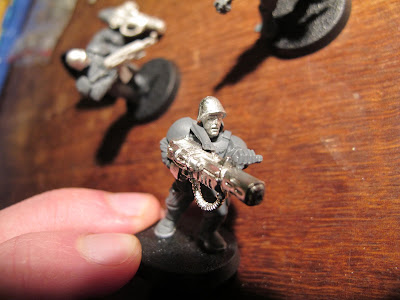 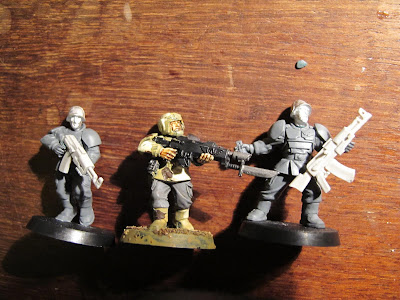 The heads...look a little small. what do you think? I'm happy enough to use them. 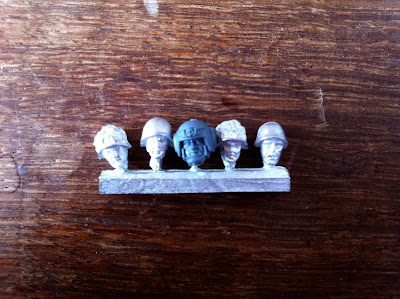 As you can see, the 'heroic' scaled games worskhop Cadian faces are wider, and the helmet itself far more chunky than the Russian heads. They look alright on the soldiers body. And hopefully a lot better when finished.

Tomorrow I just need to buy greenstuff and super-glue and I can begin work on building my first squad.

I also had the idea of keeping one squad with Cadian heads, sculpting them into K6-3 helmets and give them knee pads.  They'll have carapace armour, 2 plasmas, a flamer, and a ride in my valkryie and use them to assault objectives. I'll also give them backpacks because they can't keep their gear in a BMD like everyone else....

I've also decided to give the Dragunovs to 'Ratlings' instead of a vet squad...they'll be moving too much to use them anyway.

PS check out this fantastic song. If you like tanks which you probably do, this song matches them perfectly.

Posted by revenant at 4:15 pm No comments: