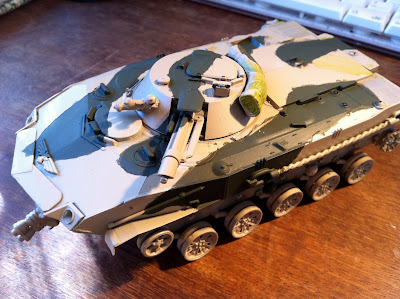 Greetings.
Okay, I went with Tallarn's advice. I watered down the catachan green and applied in around 5-6 coats. I'm beginning to suspect the paint I'm using is a bad one (that's a lot of coats) It actually doesn't look that bad though, or is too thick. However as you can see in the picture, the paint has built up at the edges of the masking blu-tack.
I have also found out I don't like the colours I used very much. Well, the green is fine, but the tamiya wooden decking colour spray makes the vehicle look painted for the middle east. I want a more dreary colour scheme with more green.
I'm going to experiment some more before I buy an airbrush, which I can't afford anyway.
I shall buy two different colour tamiya sprays and mask as I have done for this. I'm going to spray the BMD in green first however, to get a more temperate emphasis.
For the Battle report:
I used
750 Point Army
HQ
Company Command Squad-
Bolt Pistol, Power Weapon, Plasma Gun x2
92pts
Troops
Platoon Command Squad
Power Sword, 2x Grenade Launcher
50pts
Infantry Squad
50pts
Infantry Squad
Flamer, Chimera ML/HF/HS
120pts
Infantry squad
Flamer, Chimera ML/HB/HS
120pts
Veteran Squad
Meltagun x2, flamer, Chimera ML/HF
150pts
Heavy Support
Leman Russ Demolisher, Lascannon, Heavy Stubber
170pts
Total= 754

My allied steel legion army had Infantry squads, a chimera, some melta vets and a leman russ.
The space wolves had a 6 strong bike squad, a big marine squad with some psycher, a land speeder with multi melta and another marine squad. Yep, I know nothing of my enemy.
The necrons had 2x 11 man warriors, 5 destroyers and a destroyer lord.
I don't have time for an in depth one, but myself and a friend who plays IG versed a space wolf army and a Necron one.
It was dawn of war, and there were three objectives to capture.
We went first, and I thought If we deployed as one the enemy would be destroyed from concentrated fire, if they attacked piecemeal.
One objective is in the building the necrons are hiding behind, the other is right above it behind those sand bags. Our objective is in the midst of our lines.
Note my demolisher's position: the destroyers immobilised the chimera in front of it, slowing it down. I did the same mistake versing my ally another game. Never again will I make tank columns!
I used the platoon command squad as bait to the enemy. it sortof worked...
Turn 3??  The destroyer Lord finally becomes usefull, and buys some time for the space marines.
One of the space wolf squads kills a few of my allies troops and his chimera. The wolf bikers do similar. Both die to massed fire-power from allies russ and our infantry squads. 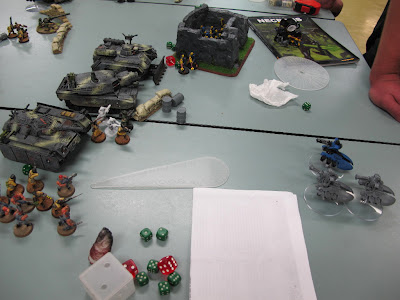 The game ended on turn 5 with a draw. It was sad, because With one more turn we possibly would have won (having two objectives and contesting another)
What did I learn?
1. Don't form tank columns.
2. Be Swifter with chimeras, and don't forget to contest ASAP.
3. Demolishers (and autocannons?) scare the fuck out of people.
4. Keeping imperial guard units supporting each other make the enemy scared due to the possible firepower they can let loose.
5. Don't attack Imperial guard Piecemeal.
6. It helps when all the enemy has for anti tank is meltabombs, a single landspeeder, a destroyer lord and some destroyers.
7. I love smoke launchers (already did though :)
8. Tanks go first, then Infantry. It was a bitch to have to relocate men because the tanks were behind them.
Had a great game, and my ally and opponents did well.
Next game in a fortnight is 1000pts for each person :P
Posted by revenant at 11:08 pm