Hello random viewers! Managed to get two battles in this evening. good. pretty, preatay, pretayyy good.
I feel  a bit guilty playing warhammer every-week, but not going out clubbing. But you need a job and money to do that anyway :/ time for one I think...
Anyway...
First battle, was 500 points team battle. Me and grey knights vs. Tyranids and SOB. heaps allies. The draw mission.
I played defensively again. thought this time I only had 2 chimeras.
The tyranids and sobs rushed straight for me, who was holding the objective. Ravenars decimated my army, as did sisters of battle bolters and flamers. both chimeras died.
At one stage I had the chance to shoot their repressor with my vets in chimera and got two hits with meltas at long range, but I rolled 1,s to penetrate. The game could have gone quite different actually, if they succeded. But they failed and they died the next turn.
On the left flank, A squad of Grey Knight terminators and a squad of normal grey nights with an extremely dangerous and resilient Inquisitor, advanced. The terminators all died in one turn of combat to a warrior brood, with bone swords or something. which was most of his army :/ I was really impressed with the warriors actually. Because we all know how death the grey knights would have been.
Regardless of the losses, the grey knights continued to advance and kill everything in there path. But they took a heavy toll, and only the inquisitor was left contesting the enemy objective.
On my half of the table, the sisters finished me off. At one point, If the game had ended I would have won us the game, with my veterans running to the objective from their wrecked chimera. But it went on for turn 7 and I was wiped.
Sorry for the blurry pics. I am still learning how to use my camera. I had the aperture value set at around 7 to try and get lots into focus, but I need to research how to do that correctly.
Here are the pics, in a chronological order. CBF to assign them to turns. I have uni work to do! 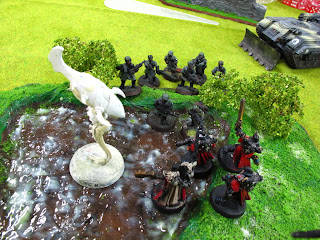 Now, for game II.
All the enemy had was a terminator squad with Belial, and a 5 man space marine squad. I had a lot more, and dropped a squad with a flamer (last game they did nothing) and gave another flamer squad a chimera. 3 at 500pts is pretty nice, for me.
This game was unfair really. The guy I crushed had an anti MEQ army. The game before, he helped stomp a Necron force. (the one I 'beat' last week)
I think having transports for guardsmen is really important. It gives them that much extra protection and mobility. But even more than that, it gives you a psychological advantage. Because I felt that I could move my tanks around in front of enemy fire, and not get scathed. Which was what happened mostly. Foot infantry, I felt scared to advance, as I know they are very vulnerable.
At 500pts the enemy exclaimed that 3 tanks are pretty scary too.
For my 750 pt army for the tournament, I will duplicate this army, but add a demolisher, for all round power.

No apologies for the crappy grammar and punctuation this week. I have a house to (re)design!