Complete 1500 army overhaul that confuses me a lot 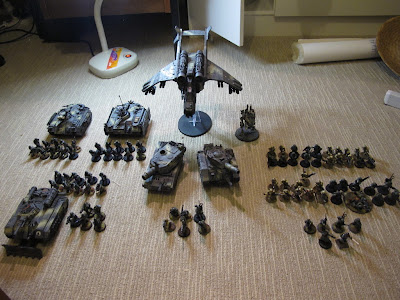 Hi.
I made a radical new list (for what my army has been) for 1500pts
It's sort of boring merely posting army lists but this blog is going to try and document all things related to my army. And my infantry painting isn't very notable to write about.
This army uses NO VETERANS!!!!11!1 and actually has two platoons. Most of all it will try and use Al Ra'heem's mad hacks to get in mine enemies face/s. Only problems is it mixes my soldiers and weaponry around outside their normal squads, so the confusion will delay my set up. 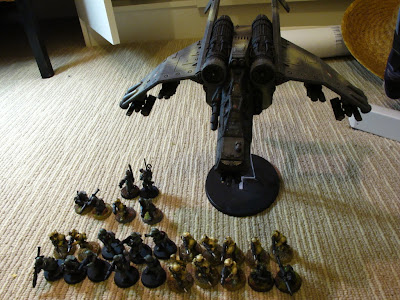 The Command squad and the combined squad of Platoon A will stay put on an objective. These defensive troops provide supporting fire using their three missile launchers and 2 plasma guns. The Vendetta provides AT fire, and can be used to rapidly move units as needed.
Part II 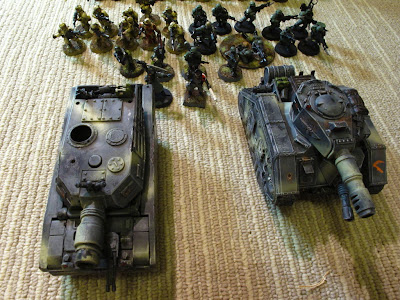 The Platoon A command and the squads with flamer and grenade launcher will all be combined. This blob advances with my Leman Russ's on an objective. The infantry can get a 4+ cover save as they hide behind my tanks. The tanks shoot things, always moving 6.
Part III 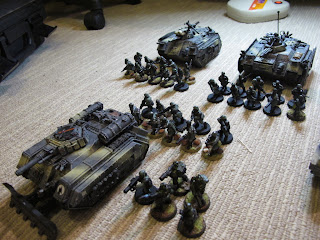 Platoon B with Al Ra'heem is held in reserve, and scouts on the field. They can link up with the tank advance or be used to fight in another location. I guess it depends what rolls I get. An Astropath will help them out. For anti tank AL Ra'heem's command squad has 4 Meltaguns. Al himself is represented my my storm trooper sgt. with plasma pistol. And awesome power-knife.
Oh and the Scout Sentinel will outflank and annoy, and perhaps get some rear armour shots. it can help out either Platoon B or Platoon A/Tanks assault.
Personally I think this is my best 1500pt list I have yet made. Please comment if you have any alteration suggestions.
It seems to work in my mind, but only time and blood can tell...
Posted by revenant at 6:17 pm