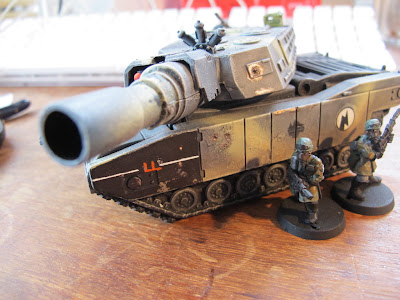 Hey! thought I would show you some pics of my most unique unit.
I got it when I was a kid, probably 10 years ago. It begun life as an awesome matchbox brand transforming tank. I think it's based on the M1 Abrams tank.

Anyway, all I had to do was use a Land raider gun mount to attach a co-axial lascannon to the turret. I used my Valkryie lascannon to do this, and added a bit of sprue and plasticard to fill in the gaps. Bluetac will affix it, leaving me able to have the hull mounted gun as a hull heavy bolter, or count the lascannon as the hull weapon, and the actually hull mounted gun as a pintle heavy stubber :)
Also, the actual gun barrel end is a replacement. I put a bunger in the original barrel years ago. I wanted to see what would happen. Turns out gunpowder breaks things.
So, I had to cut a texta up and affix that. I can remove it, and count the tank as a demolisher now, as well as being able to draw with green texta.
Here are pics. I also painted a variation of my camo scheme, just to vary my infantry a bit.
I had a Death Korps tank commander and cupola to glue onto it. But I can't find them :/ 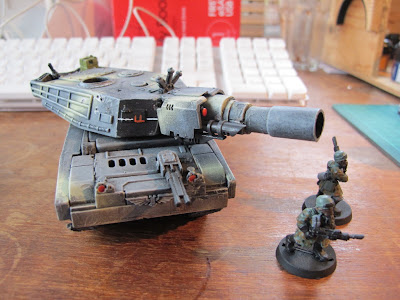 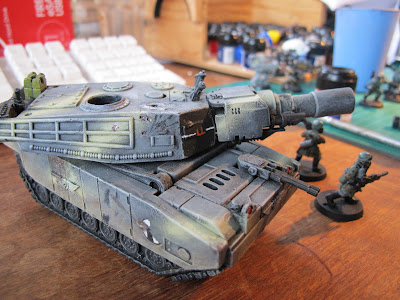 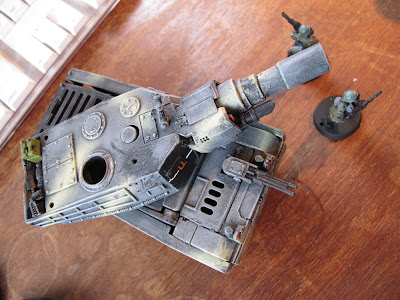 PS I can put a missile in the tank barrel. See that circle in the middle of the turret? I only have to press that, and your infantry squad will be on the ground.
...Aus...
Posted by revenant at 11:50 pm