How I painted my Infantry camo

Right!
Hello people (if any :P), I have been busy settling in to a new university, and I haven't really had time to post anything of interest. In fact, I should be designing a rabbit cage for an assignment. But whatever. this won't take long.
To the camo: a simple step by step guide on how to paint a simple but effective scheme. Note that generally I don't like painting anything more than three steps. The time spent on doing elaborate layering and complex paintjobs is beyond my attention span.
First, paint one colour. I used goblin green, because it's bright and stands out, but it is also perfectly suited to the colour of static grass and many table top scenery pieces. 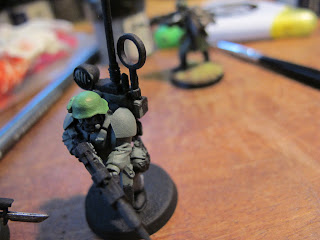 Next paint another colour. I used scorched brown. Paint large blobs (the blobs will be covered with another colour and will need to be large so the other layer is not too small) and a few dots near them. 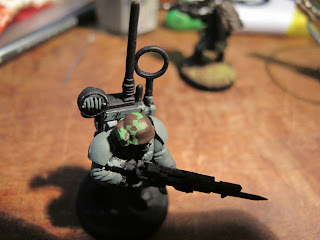 Next paint another colour in blobs over the top of the first two layers. I combined black with dark angels green to get a very dark green. I try to ensure the base coat is not too prominent to keep an even balance. Include dots and blobs with the blobs having 'arms' so they are not simply pear shaped, but perhaps with a branch too. 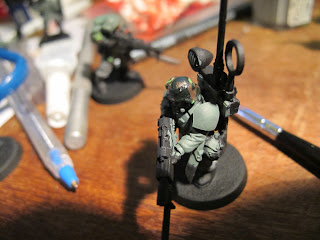 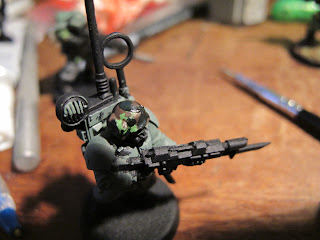 Lastly, put a few dots of the first layers colour over the other two colours (brown and dark green). 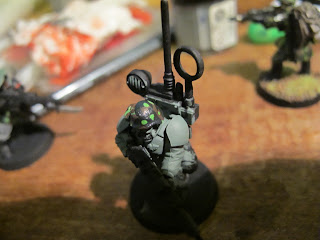 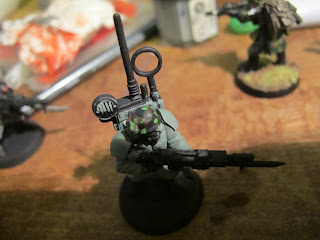 Fin!!!!
On other soldiers I lightly drybushed desert yellow to make them appear dirty and battle worn, but not for this guy. If any of you have a good idea to dampen/dirty this scheme, please comment!
The scheme I used actually works very well to camoflauge. If I put the guardsman on some grass outside, he blended in very well, and they do the same over woodland pieces on the tabletop.
If you don't like my colours just choose some that suit you.
Here is an example of a soldier with his coat done in the same way. In my army, the storm troopers and veterans get camouflage (mostly, these are the metal steel legionnaires)  while the line infantry just gets field grey. I originally had my army painted in the common steel legion scheme, but I don't see how they match the tanks at all so I picked field grey, as it looks like a mid point between the rotting flesh (a green colour) and codex grey.
But to vary my regular infantry, I paint a couple of soldiers with either a helmet, pants, or coat in a different scheme. I figure that on the front lines, supplies can be broken and troops are issued with whatever is available (and the camo is rarer than the field grey) 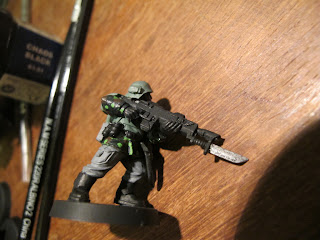 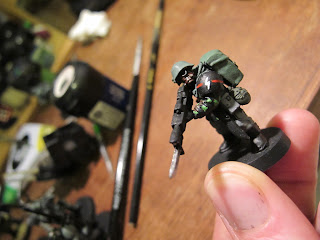 Here is an actual veteran, whereas the cadians are just regulars. The Cadian with the red line behind the steel legion symbol is in my tank hunter squad (krak and meltabombs).
Actually, I pretty much copied an underground experimental electronic band from the 70's.
If you can pick the band, I will be so proud of you. 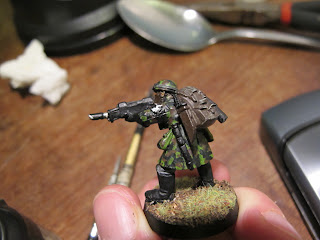 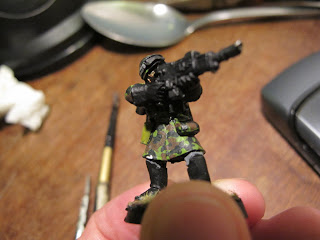 I have now noticed that I have done the blobs a bit differently on this veteran, his are more random and less...well...blobby.
PS all the field grey will be washed. I used to water down dark green and black but it doesn't work so well.  I just need to buy a wash first!

Bloody hell...this took a fair bit longer than it should have.
Over and out!
Next Month: I show you how I painted my armour! (because everyone's take on the steel legion colour scheme seems to have been achieved in a different way, resulting in differing qualities. It is VERY easy to do, and I am a far more motivated vehicle painter) I have retouched them too, improving them by about 15% :)

Next week I'll post a text instruction, and update it with photos (I can't paint what I can't afford sadly, and I plan on two more glorious Chimeras)
Posted by revenant at 8:17 pm