Just played a game yo. I killed 4 space marines (and 2 indirectly from an exploding chimera) and lost all 754 points of my force.
It was an annihilation mission. I fought a small space marine army, composting of:
a scout squad with snipers
veterans of some kind with strength 6 power swords with Pedro Kantor (in Rhino)
A 5 man tactical squad in rhino with flamer
A 5 man tactical squad with Missile Launcher
A 5 man assault squad.
I fielded my 754 pt army posted in this blog earlier.
Basically, my command squad sat in a building overlooking everything. But so did the enemy, on the opposite side of the field. They shot my command squad up. All i did was stun a rhino with a rocket.
My platoon command and veteran squad and command squad were deployed, with myself going second.
Due to the experience of my first battle, and what someone suggested, I kept my three armoured fist squads in reserves. Which then arrived piecemeal and were swarmed by his army.
Unfortunately the scenery wasn't very pretty. 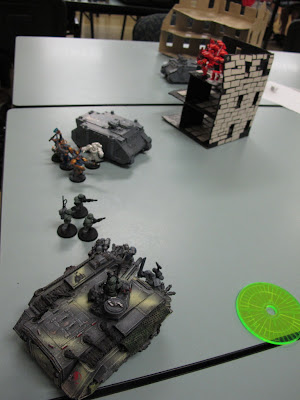 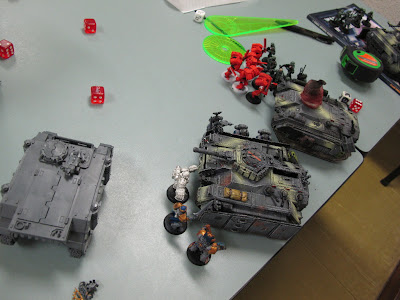 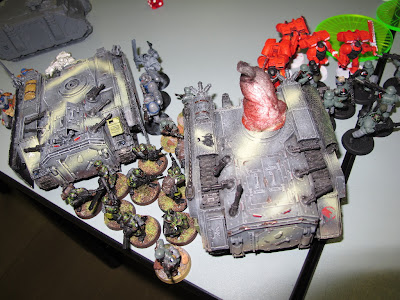 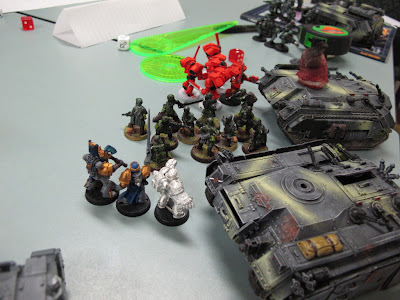 And the veterans kill the 3 marines that survived the first chimera blast. Then get raped.

Tl;dr, don't put your army in reserve, to be easily swarmed by the enemy as they arrive piecemeal. Also, don't leave your command squad in view of all the enemy, even if they have a great arc of fire.
A bit devo, because my army could completely have cause havoc, with the enemy lacking AT weapons aside from a missile launcher and krak grenades.
At least I have learnt!
Posted by revenant at 10:29 pm