My Eldar Allies ran:
Yriel with 10 stormguardians
9 dire avengers with exarch
Fire Prism
Enemy Guard ran:
Basic HQ
Basic un-upgraded Infantry platoon x2
Armoured fist squad
Leman Russ with heavy bolter sponsons and lascannon
Enemy Orks ran:
Mek with shock attack gun in a grot artillery unit with 3x cannons
20 boyz
A helicopter thing with TL rockkits
2 Killer Kans
Grots
We deployed in table quarters. we had first turn in a sieze ground mission.
So, my platoon command squad, who did nothing all game, capture one objective up our table end. Our victories veteran and Eldar storm guardians capture the objective in the sandbags in the centre of the table. The flanking Orks capture the objective to the side after defending it from the Avengers. The guard infantry platoon and the grots who hung at the back capture the objective in their DLZ.
So what did I learn?
Getting up in your enemies face is very good. Most of the battle was up near the enemy table edge. If my Eldar comrade had some faster troops I think perhaps me might have broken the enemies back. But I'm not sure. If I had another heavy flamer on my chimera that was near the orks who flanked, I could have softened them up enough for the Avengers to finish them. But instead I send that squad up to annoy the enemy, and Distract them. With good luck, even with the destroyed chimera, the men survived amazingly for two more turns and they even threatened the platoon sitting on an objective!
One of my opponents said that the Russ held took a lot of attention from their troops. It's true. I spent three turns with my melta vets shooting and fighting it. If I killed it in 2 turns, I would have secured another objective for us (the one the chimera opened up) so perhaps I need to find another 10 points for 3x meltas for that squad. But If I didn't kill the Russ, I hate to think what it would have done to us, so i didn't really have an option.
I think heavy flamers are great now. I have one I'll add to my chimera with the heavy bolter :)
For the 2nd battle (only had time for 3 turns) i fought a small space wolves army. 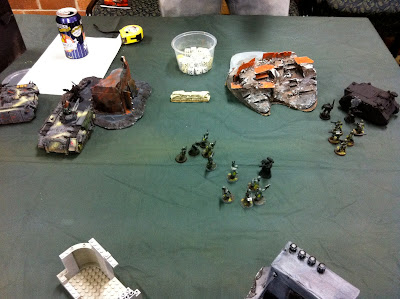 I moved up my chimeras, and in 2nd turn shot the space marines up. They failed many saves. It was more or less a repeat of my last match against marines. They don't have enough men to stand up to my force at 500pts. If we played for another turn I would have won, so my opponent granted me moral victory.
They had some dude with a harsh wind that killed some people, and a squad killed a chimera with krak. I killed all but one of the other squad with 2x chimeras and men, and the squad that killed my chimera lost a few men to plasma and melta guns.
Posted by revenant at 11:52 pm