So, I was working out how to make it more chimera-ish.
I didn't end up putting firing ports on this one. Perhaps next one. I make a big plasticard hatch. I think a little too big, I'll use additional card on top of the card that covers the gap in the vehicle. I decided to just have a rear small door, that the soldiers will need to duck under. but if they open the hatch and the door they can get out easy. I used this hatch already on the tank as a door because it looks good and is about the right size to close up the gap at the rear.

Also, with my Chimeras being BMD's, and my soldiers being veterans, and my army going to have 3 aircraft, and everything being Russian, I have decided to base my army on a historical unit.

from wiki: "After an experimental period, the 104th Parachute Regiment of 76th Airborne Division (Of the VDV, or Russian Airborne Troops) became the first Russian ground forces regiment that was fully composed of professional soldiers (and not of "srochniki" – the conscripted soldiers aged eighteen)"

I think this gives me a reason to have my soldiers as veterans, and for my chimeras to look different to normal chimeras.
This background then prevents me from using heavy armour. Airborne troops still have light armour and self propelled artillery though. So instead of Russ's I'll use Banewolfs with melta cannon for anti tank, and Hellhounds. Perhaps a medusa or manticore too.

This means half my army will be fast, and everything being able to move 12" a turn.

Thanks to the BMD's longer body, the enemy will get more sideshots, which is good.
It is good because as well as using storm troopers, it won't mean I will have an army that is too competitive. 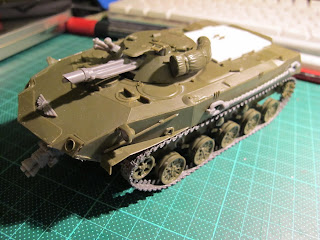