Had a couple of battles. I have now tested my 1000pt VDV army list.

It seems to perform well. I have no problem killing tanks at least, the army having a vendetta and 9X Melta guns.
I played a non conventional game: My 1000pt IG army, Vs another 1000pt IG force which included a leman russ, 2x valkryies, a chimera, stormtroopers with lord commissar and veterans.
There was another force with 2 Leman Russes, a rhino, and 11 space marines Including a captain. (these belonged to a new player, who was defending an objective worth 3 Vps, and the 2 other objectives were only one each.
I managed to kill all the Imperial Guard armour as well as the space marine russes. (the Hind valkryie killed a leman russ via multilaser shots to the rear armour! :D (I had a lot of good luck though)
There were two survivors by the end of the game: A lone space marine and a wounded Lord Commissar. I had an immobilised vendetta contesting the IG players objective, my valkryie was contesting the Space marines 3pt value one and my chimera full of meltavets was on my objective. Unfortunately the commissar ran 6" and contested the one I held. Draw! GG too.
However I need a bit of fine tuning. The vet unit riding in the valkryie has this:
Plasma gun, Flamer, Autocannon, Forward Sentries
130pts
Their role is to either deploy on an objective on foot, while the rest of my force moves forward. But I'm not sure this is wise, as they''ll get smashed in assault. I think since my valk usually outflanks they should ride in it almost always, as mobile objective takers.
might scrap the auto cannon and forward sentries and arm them with 2x plasma and a flamer.
so Plasma gun x2, carapace armour, flamer for 135pts. I figure they'll be able to attack the rear armour of tanks due to their mobility, they could kill some MEQ or hard units, flame weak ones, and maybe the carapace armour will be help them survive to contest or take an objective once they deploy.
Below are pics of another battle. 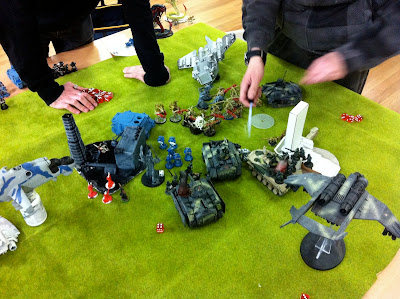